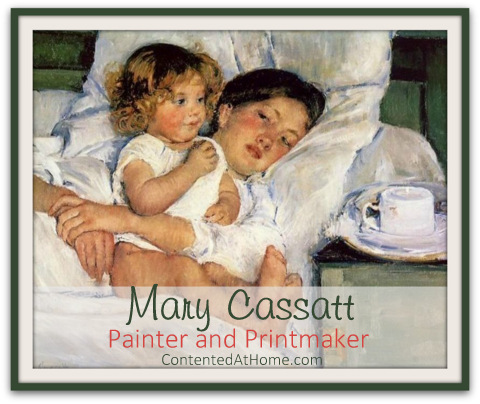 Mary Stevenson Cassatt, an American painter and printmaker, was born May 22, 1844, in Allegheny City, Pennsylvania (now part of Pittsburgh). Her father, Robert Simpson Cassatt, was a stock broker and land speculator. Her mother, Katherine, came from a banking family.

The Cassatt family, part of the upper-middle-class, moved from Allegheny City to Lancaster, and then to the Philadelphia area, where Mary began school at age six. Like most girls of her time, Mary was educated to be a homemaker. She learned homemaking skills and embroidery, and also studied music, sketching, and painting.

Over her family’s objections, Mary enrolled in Pennsylvania Academy of the Fine Arts in Philadelphia, one of only a few schools open to female students, at the age of sixteen. She found that the male faculty and students were patronizing, and the few female students were only studying art as a hobby. Mary decided to leave and study art in Europe, where she could learn at her own pace. 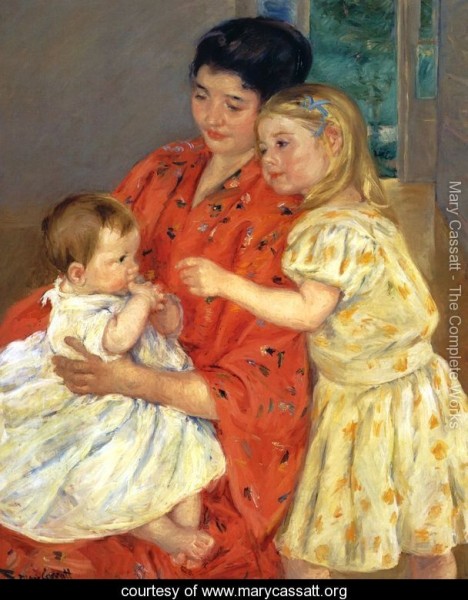 Mother and Sara Admiring the Baby by Mary Cassatt

Mary Cassatt left the United States for Paris in 1866. There she took private lessons at the Louvre, where she studied and copied art masterpieces.

In 1868 one of her paintings was selected for the Paris Salon, a French exhibition. Remembering her father’s strong objections to her having a career as an artist, she submitted her painting under the name Mary Stevenson. She was undoubtedly thrilled to find that her painting was well received.

Mary returned home in 1870 due to the beginning of the Franco-Prussian War. She moved back home with her family, who now lived in Altoona, Pennsylvania. Much to her frustration, she found it very difficult to obtain art supplies, and her father refused to pay for anything connected to her painting. 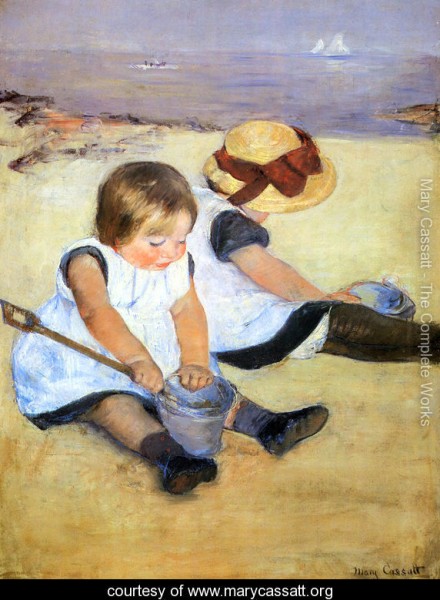 Children Playing on the Beach by Mary Cassatt

Mary once again left the United States to pursue her art. She studied and painted in Belgium, Spain, and Rome before settling in Paris.

Mary Cassatt was one of a very few women who became an Impressionist painter. She exhibited eleven paintings with Impressionist artists in 1879. She is most well-known for her paintings of women in everyday settings, especially her poignant depictions of mothers and children.

In her later years, Mary was forced to give up her painting as she lost her vision due to diabetes. She lived in almost total blindness from 1912 until her death on June 14, 1926, in Le Mesnil-Theribus, France.

Books About Mary Cassatt and Her Art

See the complete works of Mary Cassatt, and even download them to use for your own artist study! You may also view all Cassatt’s paintings in a slide show. 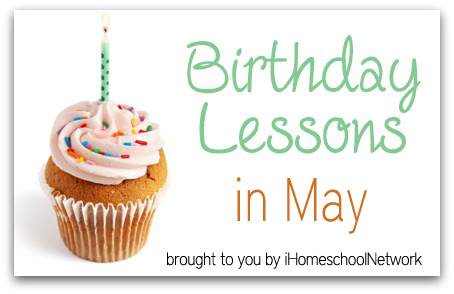 Find more lessons about famous people born in May at iHomeschool Network!