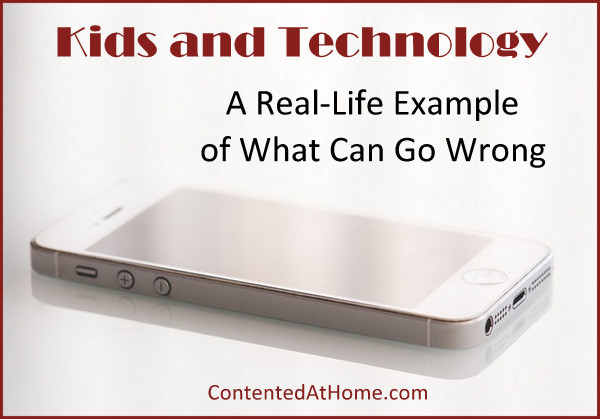 Kids & Technology: A Real-Life Example of What Can Go Wrong

It all came out on the last day of our vacation. We had rented a condo in Park City, UT, and decided to head home a day early. Elisabeth was finishing up the dishes in the sink while the rest of her siblings were looking around to make sure we hadn’t forgotten anything.

Daddy was checking the maps on his phone, sitting at the bar across the sink from Elisabeth. He noticed she was spending more time on her phone than actually doing dishes, and was acting quite furtive, not letting anyone see what she was doing. He asked her for it, and she reluctantly handed it over.

What he found blew his mind and broke his heart, devastating his world.

She was playing a game that allowed conversations with other people. Unbeknownst to us, she was in contact with several people, and had been for several months.

She had a “boyfriend” and several other people that she was in constant communication with, even after she was supposed to have the phone turned off for the night. Her “boyfriend” had recently broken up with her, and was no longer replying to any of her attempts at communication. Her other friends were counseling her on how to handle the situation, mostly with the wrong advice. She was struggling with depression.

We had plans to attend a well-known area rodeo, and the kids were very excited. The night we were to attend, I got hit with vertigo to the point I was vomiting. We ended up not going.

The next night, we decided we’d try again, since I was feeling better. Something just didn’t feel right, so we decided to go swimming instead. After finding out what Elisabeth was up to on the phone, her dad asked her why she was not upset about missing the rodeo.

She paled instantly, and started shaking. One of the guys (he said he was 16) that she had been in contact with on her game told her he would be at the rodeo and would be looking for her. I believe with all my heart that God kept us from going to that rodeo just to keep Elisabeth safe.

Needless to say, Elisabeth lost all privileges to electronic devices. The result was a deep depression to the point where we locked up all knives and medications in fear of a suicide attempt.

We explained to her the dangers of the game, of talking to strangers online. She says she has learned her lesson and will never again attempt communication with anyone online.

After attending a church youth camp where God helped her with her depression, she is once again the happy 13-year-old girl I once knew. My husband and I are still on high alert several months later, knowing the dangers she opened, not only to herself, but to the rest of her siblings as well. Thankfully, God has kept us safe.

As a parent in this electronic world, I must be hyper vigilant to the new dangers presented to our children that are disguised to get past our best defenses. I have learned my lesson, as well.