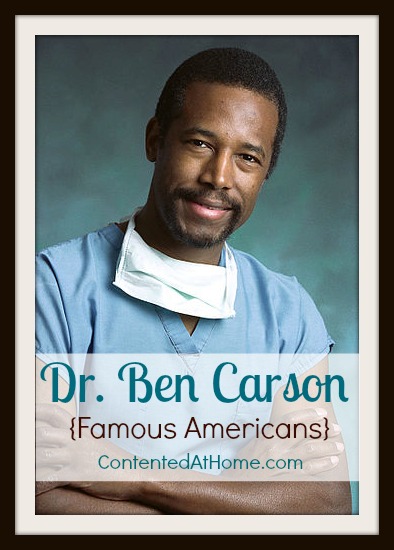 So many of America’s “heroes” have been chosen for all the wrong reasons. Sports figures, actors and actresses, media personalities–they may be popular, but that doesn’t make them heroes.

True heroism involves integrity, courage, and self-sacrifice. It is rooted in God-honoring character qualities within the heart.

Dr. Ben Carson is an excellent example of great character and significant accomplishments, even in the face of adversity.

Benjamin Solomon Carson was born in Detroit, Michigan, on September 18, 1951. When he was only 8 years old, his parents divorced, leaving his mother to support him and his brother.

As an elementary school student, Ben Carson was far behind others his own age. In fact, he was teased by his classmates for being “the dumbest kid in fifth grade.”

Carson’s mother, who sometimes worked two or three cleaning jobs at a time, made a decision that changed the course of Ben’s life. She began allowing her sons to watch only two television programs a week. She also required them to read two books each week and write book reports.

Ben didn’t realize until much later that his mother had never been educated beyond third grade and could barely read. Her persistence was rewarded when he was at the top of his class with 1 1/2 years. By the time he graduated, he was earning all A’s and was voted most likely to succeed.

With a full scholarship to Yale, Carson completed a degree in psychology in 1973. He then attended medical school and became interested in neurosurgery.

After earning his medical degree, he became the first African-American neurosurgical resident at the prestigious Johns Hopkins Hospital. In 1984 Carson was named director of pediatric neurosurgery, becoming the youngest doctor to hold the position (he was only 33).

In addition to his amazing medical career, Dr. Carson is well-known for courageously expressing his Biblical beliefs about marriage, evolution, and abortion, even though his views earn him criticism. He is also an author and speaker.

Dr. Ben Carson is truly a modern-day hero and role model. I’m excited to hear that he will be speaking at Great Homeschool Conventions in Cincinnati, OH, and Greenville, SC!

Limited tickets are available, so you’ll want to act quickly for your opportunity to see Dr. Carson live at one of these locations.